This week ‘Player With PODential’ article has been aptly named ‘Player With BONTential’! When looking for a point of difference replacement for Gaz, it was hard to look past Marcus Bontempelli. Even if you don’t have Gaz in your side, Bontempelli is well worth looking at, for a range of circumstances! In the lead up to finals, I will be bringing you a selection of players that cover a range of situations and positions, so you can best finish off your SuperCoach side. This week is a defender, midfielder and a rookie/bench cover. Enjoy! 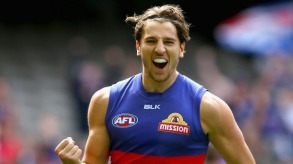 MARCUS BONTEMPELLI – MID – $568,800
‘The Bont’ makes his first appearance in my point of difference articles for 2016 and possibly for the first time ever! It might also be the last time, if he continues his current form into 2017. Bontempelli has scraped into the ‘POD’ category, being selected in 5.4% (11,949) teams currently. Around about just over 3,000 teams have traded him in so far this week (most of them being Ablett to Bont) and I assume many more will, so he could be nearing the 10% selection mark come the start of Round 17.

There’s nothing spectacular about Bontempelli’s season average of 106, considering he’s a straight midfielder, but it’s a closer look that shows the value of him. Round 1-6 Bontempelli averaged just under 86 and only managed to score a ton once in that period. Since then, something has clicked and Bontempelli has averaged a whopping 120 from his past nine game. During that nine game stretch he has tonned up seven times (78 & 86 are the two scores under 100) and has a high score of 149.

Verdict: He’s under consideration for me this week, but I have Sloane leading by a nose for my Gaz replacement. Bont’s form is hard to ignore because his ceiling is huge and he’s maintained the purple patch for a long period. If you’re tossing up between players like Bont, Neale and Sloane, three guys all in top form, Bont is the biggest POD of the lot and the extra cash he creates may assist you elsewhere!

ZAC WILLIAMS – DEF – $488,800
Zac Williams started the season at $375,500 and featured in one our preseason player radar articles. Unfortunately, he didn’t play Round 1 or 2, so bringing him in as a questionable mid-pricer was then ruled out. He has stayed in Western Sydney’s 22 since then. His season hasn’t been spectacular, with an average of 93, but he has been reasonably consistent, scoring under 84 only twice (52 & 75). Williams has scored over 90 on seven occasions and has a high score of 141, showing that he isn’t just capable of 85-100 each week. Williams’ recent average is what is most impressive. He averages 101 since Round 8, and has a three round average of 106.7 and a five round average of 101.4 (4th highest defender in both of those, if you don’t take Jack Grimes and Bob Murphy into consideration).

Verdict: His recent form is positive and he has remained pretty consistent throughout the season, without starring in most weeks. I would comfortably have him at D6. My defence is finished (with Macmillan at D6 averaging 75), but when I upgrade Collins in two or so weeks (slide Macmillan to D7), I will definitely be looking at Williams. Could be your man this week!

Verdict: I genuinely had a good look at Smith last night. He is too expensive for most downgrades, like Rose, so many would be better just going with Silvagni or Markov. However, if you need cash and don’t have a lot of options and have Liberatore or Kerridge types on your bench, then Smith could appeal to you. His scoring potential is solid for bench cover and the DPP swing is really handy. Unfortunately he doesn’t fit into my plans, but he could help you trade Gazza or Libba to Danger (although you should really have him by now)! The risks with Smith are falling out the 22 with a poor game or re-injuring his knee or a soft tissue injury after returning to AFL intensity.

What do you reckon? Let me know your thoughts by commenting below.