Welcome to the first edition of the Fantasy A-League Focus. I’ll be taking a look at some of the key issues emerging in the A-League and analyse their implications for fantasy coaches.

Shots on Target is probably the most important statistic in fantasy football, and that’s especially the case in the Fox Sports Fantasy A-League where you actually get a point for every shot on target a player registers.

Even without those points it’s a fair indication of whether we can expect players and teams who are scoring to keep scoring, and whether those who aren’t scoring will soon start finding the back of the net.

It isn’t a surprise that the underdog Jets currently sit bottom of the shots on target table with 3, but sitting just above them with only 4 is Adelaide United – the same team that scored 47 goals last season (3rd behind Victory with 56 and Sydney with 52).

Shots on Target (Team) after Round 2: 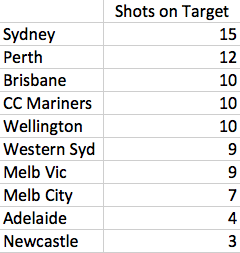 And it could actually be worse, given that both of their shots on target against the Victory in Round 1 came after Leigh Broxham’s controversial dismissal.

While it is only Round 2, this is clearly a major concern for the normally threatening Reds. Until Guillermo Amor gets his team firing again, it seems wise to avoid bringing in any Reds attackers, and consider trading out any you already have.

Another group to avoid based on the early signs are Central Coast Mariners defenders. Tony Walmsley has completely transformed the previously stoic Mariners into an extremely attack-minded team – great for the fantasy prospects of Fabio Ferreira, not so much for Jake McGing.

The consequence of pushing so many players forward is that it leaves them open at the back, and this is reflected in the fact they’ve conceded the most shots on target in the first two rounds.

Shots on Target Conceded (Team) after Round 2:

It’s an unfortunate situation for Fantasy A-League coaches, given that the Mariners provide us with several cheap defensive options.

With Walmsley expected to continue to encourage his team to attack it’s likely his defenders won’t be keeping many clean sheets. It’s still ok to pick them given their prices, but perhaps look at your Mariners defenders as bench cover rather than starters.

Graham Arnold’s men are not top of the A-League table, have scored only two goals, and they were fortunate that Jason Hoffman’s goal was ruled offside before finding a late winner against the Jets.

However, after 2 rounds they have produced the most shots on target (15) and conceded only 1 (which was a goal – as would have been Hoffman’s strike if allowed).

Again, it is only Round 2 and bigger challenges await, however if Sydney continue in this form – producing many shots while conceding very few – then their players (both attackers and defenders) will rise to prominence in Fantasy A-League.

Alex Brosque, in particular, has started well. He’s registered 4 shots on target, 4 shot assists, a goal, an assist and 3 bonus points for man-of-the-match honours against the Jets, for a total of 21 points.

An encounter with the Mariners in Round 4 may prove to be a lucrative one for Brosque owners.