Melbourne City’s first season after the City Football Group takeover was reasonably successful, winning one final and finishing fifth with nine wins. The stint from David Villa was successful yet brief, while Damien Duff was hampered with injuries all season. City consistently had a leaky defence despite good seasons from Patrick Kisnorbo and Kew Jaliens, and their goal difference ended as negative five.

City’s main challenge will always be how they are seen in relation to their older brother, Melbourne Victory. Last season they were inferior to the Victory in both offence (20 fewer goals) and defence (ten more goals conceded), so closing these gaps are crucial. With the City Football Group ownership comes expectation, and winning a sole elimination final won’t be enough this season.

The pre-season has been promising for City, especially their FFA Cup run which has extending into the semi-finals. Nine matches for five wins and a draw makes impressive reading, although onlu one of those wins is against A-Legaue opponents: the 5-1 drubbing of Wellington in the Cup. 30 goals across the nine matches shows scoring potential, can they be transferred into the season proper?

Predicted Round 1 Line Up 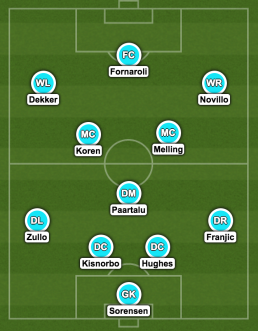 Aaron Mooy (MID, $350k) proved last year how dominant he has become averaging over 8 points per game. However, he will miss Round 1 this year as the Socceroos travel to take on Jordan. Given his pre-season form though (six goals), he’s probably still worth the gamble.

If we go back a couple of seasons, Ivan Franjic (DEF, $250k) had a great season as an Out Of Position (OOP) defender, overlapping and scoring goals and getting assists. It’s a lot to shell out for a defender, despite his scoring potential, so only for the bravest coaches.

Not a whole lot of value with City players this season, but there might be a snippet in import Bruno Fornaroli (FWD, $225k). Three goals in the pre-season and if the Uruguayan known as El Tuna fires City will be powerful. If he’s a fizzer, well…

Harry Novillo (FWD, $275k) showed some really good signs at the back of last season, but has been struggling with injuries this pre-season and looks overpriced, especially considering what else is available up forward.

As a controlling midfielder, Eric Paartalu (MID, $225k) is integral to City’s make-up. As a fantasy option though, he doesn’t bring a lot to the table, and the other sack of attacking players around him will more likely score more consistently.