The SuperCoach season has finished – well done to Ayden Potter, the overall ranked player. We, at SCHQ, would like to congratulate all who participated; especially to all those who achieved Grand Final wins, personal bests, etc… If 2015 wasn’t your year, then stick with it and 2016 should be happier times for you.

Now, here’s what you came here for – The 2015 SuperCoach All-Australian side. I did a mid-year all Australian side after Round 12, which was reasonably well accepted, although it caused some debate as these things do. I hope you enjoy this one as much as the last – I certainly had as much fun putting it together. Enjoy! 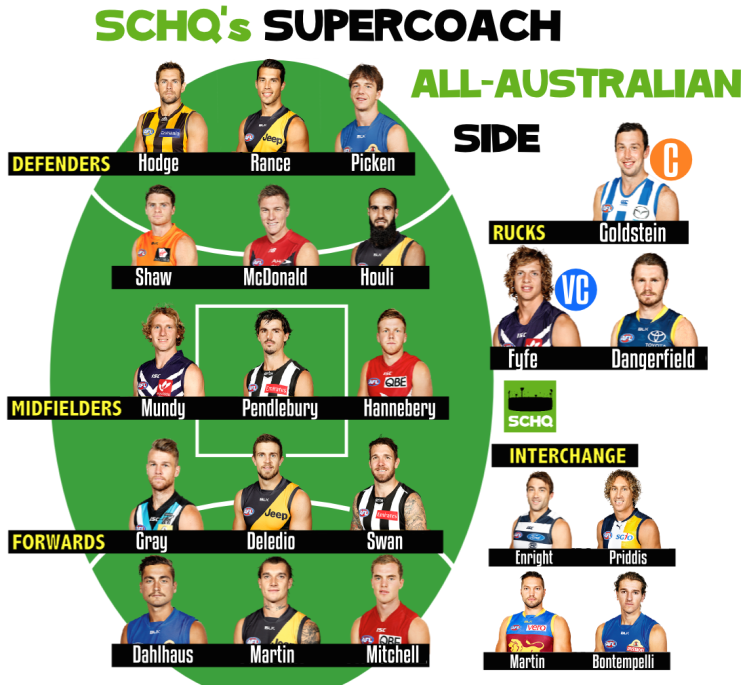 THE CRITERIA
Each player had to have played 17 games minimum to qualify, which is three quarters of the season. The players were picked by average points per game, not total points, and the players were structured into a regular 22, excluding a sub. The bench is made up of one player from each position. It was all objective, so I only looked purely at stats and positions, meaning that the forward line actually play a large chunk in the midfield. This also means that it may not be a properly functioning side (e.g. there’s no key position forwards), despite it being pretty darn good!

THE UNLUCKY PLAYERS
In the mid-year side I looked at some lucky players. This time around no one is lucky to be in the side. They’ve proven themselves as being in the top 6-7 players of their positions (or top 2 for the rucks), over a minimum of 17 games; something they can hang their hat on. However, there are a handful of unlucky players.

THE PODS
The PODs in this team are few and far between, because they’ve proven themselves over a whole AFL season. I aim for players selected in under 5% of sides when searching for PODs. Picken (9.2%), S.Martin (7.1%) and Enright (5.3%) are the only players in this side that are selected in under 10% of sides, with none in under 5%. On the flipside Gray, Swan, Martin, Bontempelli, Goldstein, Fyfe and Pendlebury were in all over 40% of sides.

C & VC CHOICES
In the mid-year side I selected Fyfe as captain and Goldstein as his vice. They’re my main men again, but have had a swap of roles this time around. Goldstein (128.81) had the highest average in the competition, followed by Fyfe (124.28). Both players only had three scores under 100. Aside from the higher average, Goldstein had a better run into the finals, played more games than Fyfe and due to this he had 13 scores of 120+ to Fyfe’s 10. Golstein also topped it off by having the highest individual score of the year (221).

Is this side the correct one in your view? Is the criteria appropriate? Who/what surprised you? Who do you think should’ve made it that didn’t? Let us know your thoughts on FaceBook, drop a comment below or hit us up on Twitter (@AaronSCHQ or @SuperCoach_HQ).